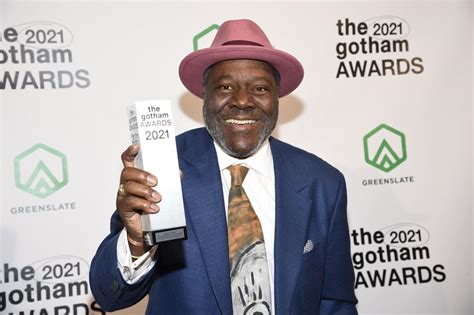 The film, which went into the event as a five-time nominee, won four awards, including the top prize of best feature.

After a quick speech thanking her loved ones and collaborators for best screenplay, Gyllenhaal declared she’d deliver a “real speech” after her second win of the evening, for breakthrough director.

“It’s expensive to make movies,” said Gyllenhaal in her second acceptance speech. “Movies cost a lot of money. You can write them, but someone’s got to make them. So then the question becomes, what is valuable? Is women telling stories that resonate between us valuable? And is it high art? And is it appealing to men? To see women that actually look like their wives or their sisters or their mothers up on-screen? I think the lineup of films being celebrated here tonight says ‘Yeah, it fuckin’ is.’”

Ahead of the awards, Faison told The Hollywood Reporter that he was hopeful that his win would allow more people to see his movie, which he feels has a particularly important message.

“It’s so close to us all right now and all of the kinds of activities that have been going on with police, especially Blacks and Hispanics and poor people in this country,” Faison said of the issues explored in the film, in which he plays the eponymous elderly Black veteran who was killed by police officers after an accidental medical alert escalated to a standoff. “It’s also the last 90 seconds of this man’s life, so you get to see a man before he is shot by law-enforcement officers who are supposed to be there to protect him, and they’re the ones who end up killing him.”

Apple’s CODA won two of the three awards for which it was nominated.

Accepting the breakthrough performer award, Emilia Jones said, “When you’re making a movie about a culture that you don’t belong to, it’s important to surround yourself with people who are a part of it. And on CODA, we surrounded ourselves with the best: Marlee Matlin, Troy Kotsur and Daniel Durant,” Jones thanked her co-stars, who are members of the deaf community. “They took me under their wing the minute they met me.”

The Gotham Awards are one of the first events in awards season, but Jones told THR ahead of Monday’s event that she wasn’t even thinking about awards.

“Anything that comes is just a bonus; I’m not expecting anything,” she said. “Obviously, I would love CODA to go to awards and win them, but I’m kind of trying to take it as it comes.”

On the TV side, the Gotham Awards honored buzzy new series Squid Game and Reservation Dogs with its two breakthrough series awards.

When accepting the award, Squid Game producer Kim Ji-yeon said, “We’ve experienced so many miracles since we launched this show, … and the biggest of them is how much love and support you all have shown to a foreign-language series with a very strange title.”

Creator Hwang Dong-hyuk reminisced about his long journey to get his series made and then how quickly it became a hit. “When I wrote this script it was 2009, 12 years ago. I did my best but nobody liked it,” he said. “People said, ‘it’s unrealistic, it’s too violent, it’s absurd, it’s weird.’ It took 12 years to make this show and show it to the people. And it took less than 12 days to become the No. 1 show on the planet. What can I say? It’s a miracle.”

Accepting his award relatively late in the roughly three-hour-long show, Reservation Dogs creator Sterlin Harjo joked, “White people have long-ass speeches and y’all been saying these speeches for way too fuckin’ long. … We love you, we’re here for you, don’t fuckin’ talk so long. Jesus Christ.”

On a more serious note, he called out the event venue, Cipriani Wall Street, urging the audience to remember the Indigenous people who called Manhattan home.

“Everyone think about Wall Street,” he said. “There were Indigenous people that lived here, and they fuckin’ came here and gave them beads and tricked them into giving up their land. And then they built a wall to keep them out of their land, and that’s why it’s called Wall Street. They built a fuckin’ wall to keep our people out of that land. I want you all to remember that. That’s what they did to us. Remember Trump tried to build a wall? They did that a long time ago to keep native people out of this land.”

Over the summer, the Gotham Awards made its acting awards gender-neutral, a move that was praised by nonbinary Billions actor Asia Kate Dillon as they presented the award for outstanding performance in a new series, the other category that resulted in a tie.

“I would first like to commend the Gotham Awards for eliminating gender from their awards categories because true talent shines through the constructs meant to separate us,” Dillon said.

One of the category’s two winners, Ethan Hawke, took a moment to talk about the value of being nominated alongside women.

“I’ve never been nominated where the male and female performances were not separated, and it’s a very powerful thing to see these clips and see us not defined by our gender,” Hawke, who was recognized for his role in The Good Lord Bird, said. “I wish that the women in this room had as many opportunities as the men. Directors don’t get differentiated by gender. I never understood why actors do, so I’m so proud to share this award.”

Following his win, Hawke presented a tribute award to his friend and fellow actor Peter Dinklage.

“To work opposite her is to feel truly seen and partnered. She elevates everything,” Moore said. ”What she presents on-screen and in life is sometimes challenging to people because it’s like she’s skinless. She demonstrates a truth that can feel uncomfortable but cool at the same time because she’s cool, right? I mean, there’s no one cooler than her.”

The 2021 awards took place in person less than a year after 2020’s winners were announced in a pandemic-delayed hybrid event in January, with winners participating via live video.

A full list of this year’s winners and nominees follows.

What Do We See When We Look at the Sky?
Alexandre Koberidze, director; Mariam Shatberashvili, producers (MUBI)

The Green Knight, David Lowery (A24)

Frankie Faison in The Killing of Kenneth Chamberlain (Gravitas Ventures)(WINNER)

Taylour Paige in Zola (A24)

Colman Domingo in Zola (A24)

Suzanna Son in Red Rocket (A24)

Anjana Vasan in We Are Lady Parts (Peacock)